“Get ready to run,” I said to my wife as we watched a muscular swell gain momentum shortly after noon Monday at Hanakapi‘ai Beach. Like the 40 or so people at the beach, we’d hiked the first two miles of the Kalalau Trail on a brilliant sunny day, watching towering waves crash into the Napali bluffs.

We’d read the warning signs and cautiously chose our lunch spot, on the volcanic rocks far above the beach. The strongest waves neared the top of the beach, but we had at least 30 feet of buffer, or so we thought. We ate our hard-boiled eggs and blue-corn chips, fueling up for the challenging hike to Hanakapa‘ai Falls.

A family of eight went down to the beach to take a photo, which, given the size of the swells made me nervous. I half-joked to my wife: “the final family portrait.” She took a photo of them just as a frighteningly forceful wave gained steam. Before the wave hit the beach I said, “Get ready to run.”

A second later the water was up to our ankles, then instantly above our knees, higher than our waist. Then we were under water, entirely submerged, being knocked around by the sandy rogue wave. We were propelled away from the beach, scraping over the glass-sharp rocks on which we’d been sitting.

As a whitewater raft guide, I’m not unfamiliar with the power of moving water, but I’d never felt anything like this. We were absolutely helpless against the strength of this wave that just kept coming. And coming. For a moment, I didn’t know which way was up and didn’t know if we’d be carried out to sea with the wave. Perhaps the craggy rocks saved us.

It felt like getting shot out of an underwater cannon as we zoomed over the sharp volcanic rocks. I’ve swum Class IV-V rapids but this was more frightening as we didn’t know when it would end or if it would pull us out to sea, where there waves were 15-20 feet high and crashing into the cliffs. I’m not sure that if we’d been standing the water would have been over our heads, but the sudden intense force of it made it impossible to stand so we’ll never know. What I do know is that we were swept 20-plus feet from where we were sitting after getting pinballed through the rocks.

When the water receded, I was about 15 to 20 feet higher up the bank and for a couple of seconds didn’t see my wife. I screamed her name: “Jackie!” then heard her voice – she was another 10 to 15 feet up the rocks. I found her bleeding on both knees, left hip, and left arm, but she was clear-eyed and fortunately hadn’t hit her head too hard. She showed no concussion signs.

Our friend Alex was shaking, bleeding from her legs, arms and head, with a golf-ball size contusion next to her left eye. Alex is also a river guide and anticipated that we’d go straight into concussion protocol, so she told us her name and that she lives in Sacramento, showing us her mind was working.

After the rogue wave hit, the surf receded dramatically, hundreds of feet out to sea. I had one thought: This is what happens in a tsunami; we had to get to higher ground. But people around us were crying and looking for loved ones. A woman couldn’t find her son and headed into the water, searching for him. I repeatedly screamed at her, “Get out now!” She wouldn’t listen. About a minute later, the boy, who someone told me later is autistic, was found high on the rocks and his mother ran up the beach and over the rocks to meet him.

A girl right next to us, perhaps 12 to 14 years old, was moaning in pain. Her ankle appeared broken and she was unable to stand. Hiking back later we met a fireman from Southern California who’d been at the beach and had splinted her ankle before she was taken out by a Medevac helicopter from the landing pad near Hanakapi‘ai Beach. I heard a second helicopter had come to take out others who were too injured to hike back.

I still feared a second rogue wave but didn’t see one coming so we collected what gear we could. My sunglasses were gone, even though I’d had a retention cord on them, but miraculously Jackie found her phone on the ground near where she landed. Jackie lost her sun hat and FitBit, a small price to pay. Alex found my shoes – I’d crossed Hanakapi‘ai Stream barefoot and hadn’t put them back on, but I’d tied them together which may have kept them from being washed away. And Jackie’s wedding ring was still on her finger.

It appeared everyone was accounted for — no one was missing a friend or family member. I still wondered: what if a couple or someone who’d come alone had been swept out and no one knew they were missing? But at that point we didn’t think there was anything we could do to help so we re-crossed Hanakapi‘ai Stream and started climbing out.

By chance we hiked with several of the other “survivors,” retreating battered and bleeding, like a defeated army. We saw a young Asian-American couple who’d taken our photo on the hike in; she was hiking back with one shoe; he had no shoes but said his feet didn’t hurt; it was his finger that was painful. He appeared to have broken it. (We saw them again that evening at Makana North Shore Urgent Care facility in Princeville and his finger was broken. The family of the girl with the broken ankle was there too.)

I had somewhat deep cuts on my right knee and shin and on my left elbow, but what caused me the most discomfort was a deep bruise on the top of my right foot; it was painful to put my full weight on it. Thankfully we ran into a couple from Spain who gave us ibuprofen – that made the hike bearable.

When we ran into the firefighter on the trail he was wearing mismatched shoes. He could only find one of his so used a shoe from one of the injured people who’d been helicoptered out. Later we met another hiker; a man who appeared to be in his late 50s. He had a satellite phone and had been the one to call for help as there’s no cell service at Hanakapi‘ai Beach.

On the hike back we could see looks of surprise and concern on the faces of those we met. But one woman looked at us and said, “Oh my God!” Then in a weak humor attempt said, “Did you guys try to take a shortcut?” Most people just asked if we were OK. Jackie and I tended to say yes; Alex more honestly said no. Mainly we just warned people not to get near Hanakapi‘ai Beach.

After hiking for about an hour, we hit the half-mile viewpoint; Alex, who by now had two black eyes, said it felt faster hiking back.

“Time flies when you’re in shock,” I said.

Then we descended the final half mile and were back down to the trailhead near Ke‘e Beach. As we had at the beginning of the hike, we took photos in front of the Kalalau Trail and NaPali Coast State Wilderness Park signs, to have a before-and-after set of images to remember the day.

We still had open wounds and bulbous blue-black contusions, but we’d made it out. And the wave of love and gratitude that broke over us when we realized how close we’d come to serious injury or death felt even stronger than the rogue wave that pounded us into the volcanic rocks above Hanakapi‘ai Beach.

This account is provided on KalalauTrail.com with permission of the author, Michael Shapiro. Michael Shapiro is a writer, editor, photographer, interviewer and author of “The Creative Spark“. 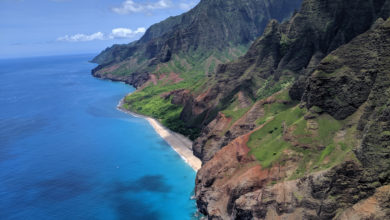 If you want to visit the Kalalau Trail in 2023, read this!