On Friday, April 26, my wife Patricia and I (and of course the kids) took an island hopper from Honolulu with our friend Eric Wong and his student Guo Jia (Tim) to Kauai. The he sight of us checking into an airport is amusing. We had four huge bags to check (two large Samsonite bags and two large duffel bags), four rather large carry-on bags, and two child car seats – two mountains of luggage and two kids in a double stroller. The flight and the minivan pickup was incredibly easy. We quickly drove up to Princeville, dropped off our stuff at the condo, and made a quick drive to Hanalei to pick up some supplies for the trail: water, sesame squares from Papaya grocery (indispensable on this trip!), and a few things for dinner and breakfast, and had dinner back at the condo. I was starting to really feel worse from the cold I had just caught that day. Lucas was not feeling well that evening – so Patricia and I had not much sleep. Nevertheless, at 5 AM the next morning, I was ready to go!

This was going to be my 8th overall hike of Kalalau trail all the way to Kalalau beach:

I guess I’m a veteran now. I feel I know the trail well at least. Most of the time, I’ve been lucky with the weather. Other times – notably with Patricia on our first trip in, hiking in a monsoon – not as lucky! This day, Eric, Tim, and I are lucky. It’s perhaps the best weather I’ve ever experienced for the hike – about 75, sunny, and a good trade wind breeze. Perfect. 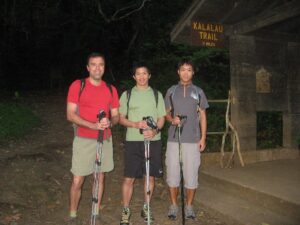 We stated at about 6:30 AM. Patricia stayed back with the kids. The sun rose just after 6 and was setting at about 7 PM. This is critical information as it gauges how fast we need to hike. We mostly took our time, taking pictures. The first person we met on the trail was a guy called Bill Summers. I met him on my last hike. He is basically taking it upon himself to repair the entire 11 mile trail by himself. The Kauai government is not helping and at times is a bit obstructive to his efforts since he is technically breaking the law by doing this himself. He’s an ex-military person who is spending his entire life savings to do this. It was a great to see him again. He seemed very happy as well. He has a camp near mile 7 of the trail.

The next person we met was….amazingly…Ted DeYoe! Ted is a vision scientist from the Medical College of Wisconsin to also does functional MRI. We’ve worked together when fMRI began in 1992. This is amazing since Ted was the 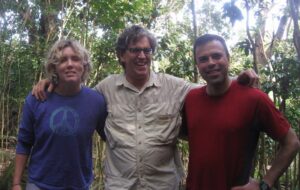 person I went with when I first did this trail in 1998! He has not done it since, so he must have been more stunned that I was! Here’s a picture. Ted was with his wife and travelling slowly. They arrived the evening before and hiked in the dark. We parted and met up with them again on our way back.

The hike was one spectacular view after the other. It’s very difficult to convey the feeling that one gets being so isolated in such a stunningly beautiful, natural, and comfortable setting. One can imagine how the first people on this island felt. At six hours, we arrived at Kalalau. Just before our arrival, we stopped at an amazing lookout point. Blue ocean on one side, amazing cliffs and beaches on each side, and 4000 foot “pali” or cliffs behind us. Here these four pictures attempt to convey the scene as you look from your left to right – facing the ocean: 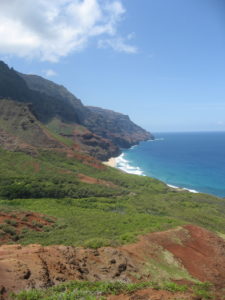 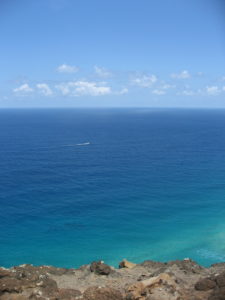 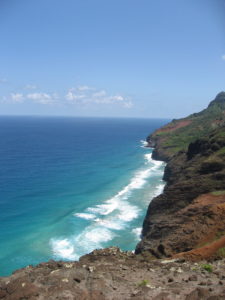 You can see Kalalau beach in the picture on the left. It’s about a 1.5 mile hike from this point. Looking straight out, there is no major land mass until Japan. This is particularly dramatic when the waves are large. You can see the sets lining up and crashing into the rock below. Today was pretty calm. Below is a composite panorama of the scene.

I’ve also included a video of that panorama:

Once at the beach, we were lucky again. During the year, the beach expands and contracts, allowing exploration of the caves at the far end – or not. This time, we were able to walk over there. Here’s a picture. 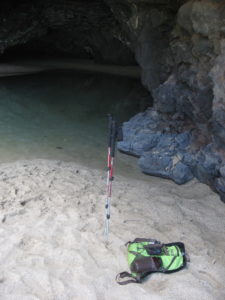 Lastly, we had to actually dip our feet in the ocean on the huge pristine, Kalalau beach. Here’s a picture of us coming back from that. After the beach, I took a quick shower in the falls (with clothes on). 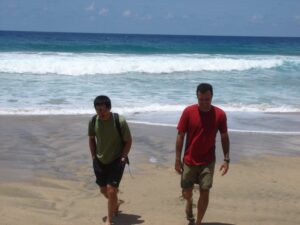 The trail has some spots that require one to focus more intensely on their footfall. They are not really hazardous in that they don’t require any extra skill than simply walking in a straight line along a two foot wide path. If one is not able to do this, the fall looks pretty bad. I’m sure people have fallen, but I think it’s less common than one would think.

Here are a few pictures of these spots, along with one of me crossing a stream – which is potentially more hazardous than the cliffs. 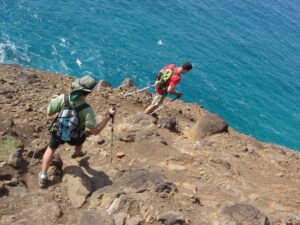 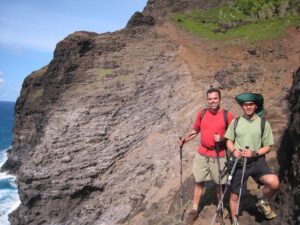 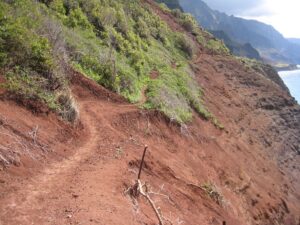 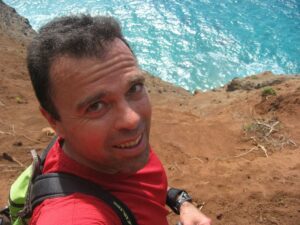 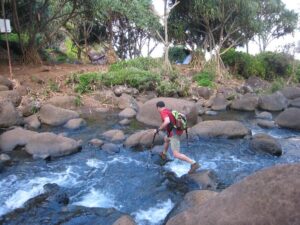 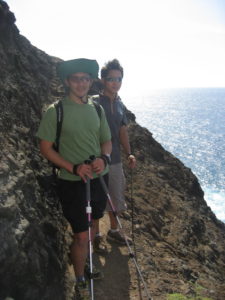 On our hike back, we took our time until we realized that we would be hiking in the dark for an hour if we kept our pace. From about mile 17 onward, we almost ran back – a very good workout! We managed to get back just before sunset – after hiking almost 12.5 hours. Here is a picture on Ke’e beach at the end and, later an “after” picture by the sign again. I was very impressed with Tim since he does not usually do endurance activities. His relative youth helped a bit I’m sure! 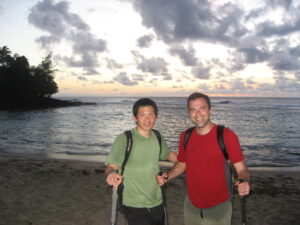 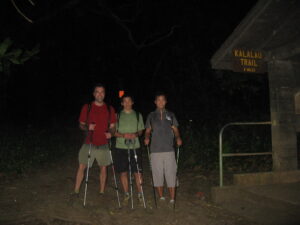 Finally, below is a google earth overview of our hike. Each star stands for each hour as marked on our gps. K1 = hour 1, and so on. Overall, it took us all a few days to recover, but the one day in and out is very do-able and not that hard if one is prepared. We didn’t carry more than 64 ounces of water since at several streams we stopped to filter the water. This kept the weight down. Other essentials: poles (reall help the knees and to distribute the weight on the rough spots). Electrolyte mix (I use Cytomax in one 32 oz bottle and Accelerade in the other), first aid kit, water filter (and iodine tablets).

On the second half of the trail, the shoes which I used for every hike but the first finally gave out. The glue holding the sole onto the shoe apparently dissolved. I fixed these with duct tape at about mile 18, which also gave out by the end of the trail. I decided that it is time to finally retire these shoes! Here’s a suitable final picture from this log! 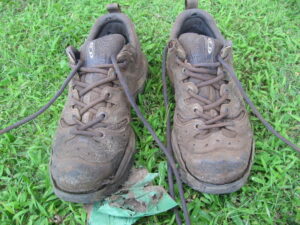