At six a.m. on a dazzling Kauai morning, my husband and I stood impatiently in Captain Zodiac’s storefront in the one-horse town of Hanalei, hoping that the drop-off boat to Kalalau would run.

We were on our way to one of the most remote, and most beautiful, beaches in the Pacific. There are no roads to Kalalau. It’s smack in the middle of a thirty-mile run of vertical sea cliffs, and devilishly hard to get to. The average person has two choices. 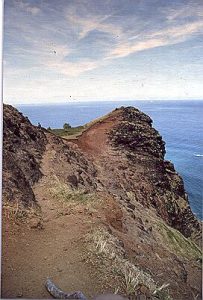 You can book passage with Captain Zodiac, the only tour company which has a permit to drop off passengers at Kalalau, part of the Na Pali Coast State Park.

Or you can hike the grueling 10.8 mile Kalalau Trail, which deserves every decimal point of its Sierra Club rating: nine in difficulty on a scale of ten. The coast is completely unnegotiable by foot beyond Kalalau; some would even say that parts of the existing trail are questionable in regards to negotiability and safety.

There is another alternative: according to stories we’d heard, there was once a woman who regularly towed her two children from Kalalau to Hanalei on a surfboard over the open sea when she needed to pick up some supplies. But we weren’t exactly in her league.

I had gambled by making reservations on the first day of the drop-off season, which runs from May 15th through September 15th. The rest of the year, landing conditions are unreliable, particularly during the winter, when forty-foot waves are common. Captain Zodiac’s had been careful to caution us that a landing still could not be guaranteed so early in the year. And sure enough, the boat didn’t run. Now it was the morning of the 16th.

As the attendant consulted someone by phone, the shop filled with tourists festooned with sunglasses and glistening with sunscreen, ready for the various tours Captain Zodiac offers. Amid giant photos of whales, rainbows, and sea caves, we waited with heavy-laden packs, clutching our camping permits (the company checks them before dropping you off), hoping to bypass the trail. What’s so special about this place? After all, we were ready to fork out $100.00 apiece, round trip, to get there.

Read the rest and see her photos on her page

Articles
Back to top button
Close
Close
Log In